I like dates, especially the way dates overlap over the course of years.  It seems each family has their fair share of birthdays doubled up on the same date.  We have those as well as a number of life-changing events that share the same day. With all the dates on a calendar I wonder why so many important happenings cluster on or around the same day.

Recently, glaring examples of this phenomenon have come to my attention, coincidences that I was unaware of.

I was putting together an album of photos I took of my daughter's house during the last weeks she lived there.  We have hundreds of photos taken over the almost 29 years we lived there as a family, rooms as backdrops tell the story of where the house started and how it changed over the years.  But my daughter wanted a series of pictures of the house as she lived in it, so I took several photos of each room as the house was listed for sale.  Once the house was sold I returned to take a series of photos of the empty rooms on the last day she lived there, which was September 7, 2014.  In the photo album I wanted to include the date of when Ken and I bought the house, which the original mortgage agreement records as September 7, 1978.  That was a stunner even for me.

It was in March of 1978 that Ken and I made a trip to Maine to look for jobs so we could relocate.  I can't find the exact date but it was sometime between March 20 and March 27.

One year later I started this blog.  At the time I didn't realize the coincidence.

I have been writing here for seven years.  Usually this day comes and goes with no recognition on my part.  Some years it gets to be April before I think, "How long have I been blogging?"

But this year I have been acutely aware of time and dates and years since this or that has happened.

This week I looked back at some of my earliest posts.  In writing about a corduroy quilt I had recently finished I wrote:     Each of the quilts I have made represents a period in my life. Upon reflection I decided that this corduroy quilt could represent my life after the move to the country, which is rich with color and texture while it is uneven and asymmetrical. I can plan small sections, but I have no idea what the final product will look like.

There was no way I could know how prophetic those words would be.  I had no idea how much life would change in the coming years.  At that time it felt like so much was possible.

The March winds this year have carried bitterly cold temperatures right to my door.  It seems a fitting start to spring after a long, dark winter.
Posted by Sharon at 10:55 PM 7 comments:

More than forty years ago my Great Aunt Kate, who raised my mom and in my eyes was my grandmother, started a quilt.  For decades she had saved scraps from every piece of clothing she had made so she could someday make a quilt.  Over the course of years she cut small hexagons from the fabric and started making "flowers" for what I have named Kate's Flower Garden Quilt~ 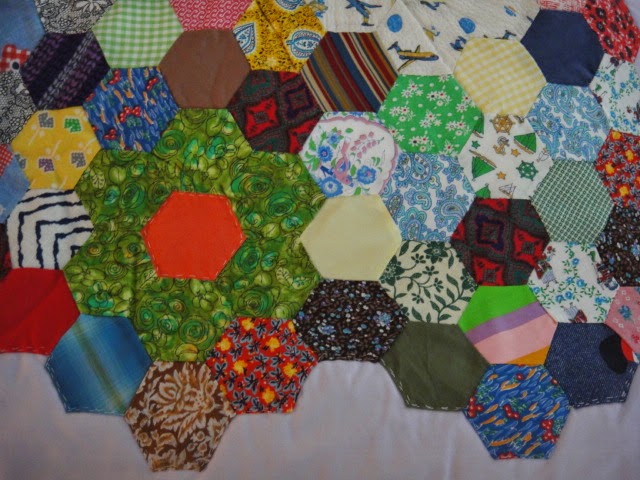 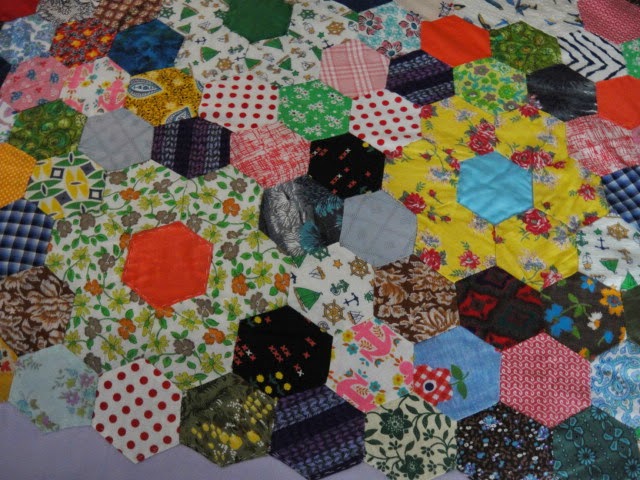 The result was a colorful array of hexagons, some organized and some not, in an unfinished odd-shaped quilt top, which I inherited.  Aunt Kate had envisioned a quilt backed in lavender, so I bought a sheet in that color and stored it away with the quilt top for many years.  I just wasn't sure how to finish it off.  I don't remember when I pulled it out to see what I could do, but it was at least a dozen years ago, because I decided it made no sense to have something so dear to my late aunt stowed away in a dark closet.  I took pieces from one end and added them to one side to even up the size and shape.  I didn't want to lose the unique zig-zag edge so I hand stitched the top onto the sheet, the edges of the sheet folded under the quilt to create a pastel frame for the memories in fabric my dear aunt collected over decades~ 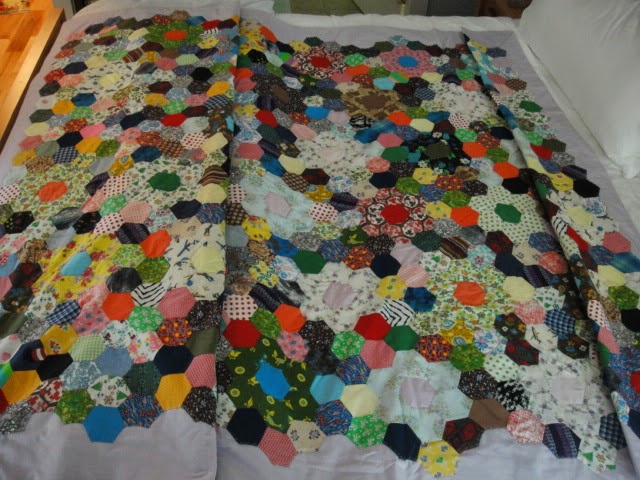 I saved all the left-over pieces with the thought that someday I would find a creative way to join them together with other fabrics that held special meaning.  That day came three years ago when I was re-organizing my own stash of scraps and came across the fabrics I had saved from a quilt I made my daughter the year before. I sewed hexagon "flowers" onto brightly colored squares.   I also had several strips in those colors, as well as some salvaged strips of strawberry fabric from some unknown source saved solely because the pattern reminded me of Aunt Kate.  I put all of it aside until I pulled it out again last summer and laid it out on the living floor to see what could be done to bring it all together.  I remembered a large piece of fabric, that I bought so long ago I don't remember where it came from, that held all the same bright colors.  A second, smaller Kate's Flower Garden Quilt II came together.  This week I finished the hand quilting.  I think Aunt Kate would approve~ 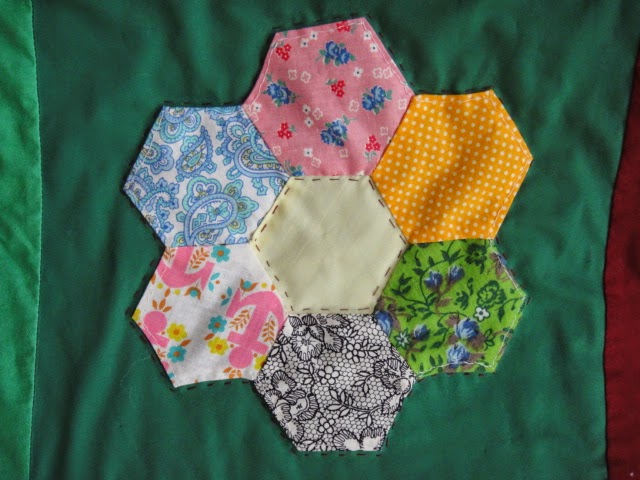 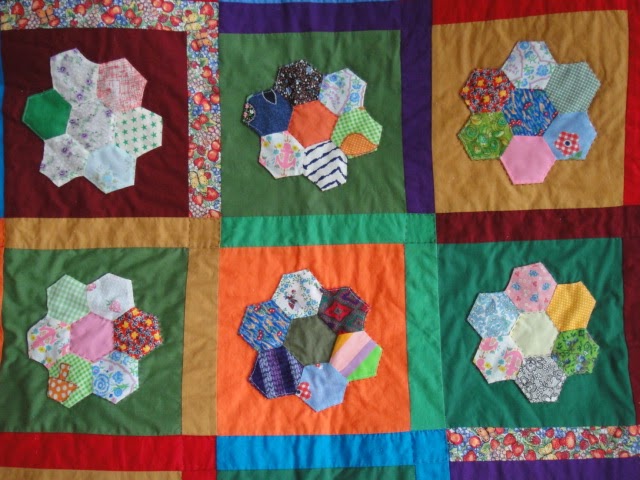 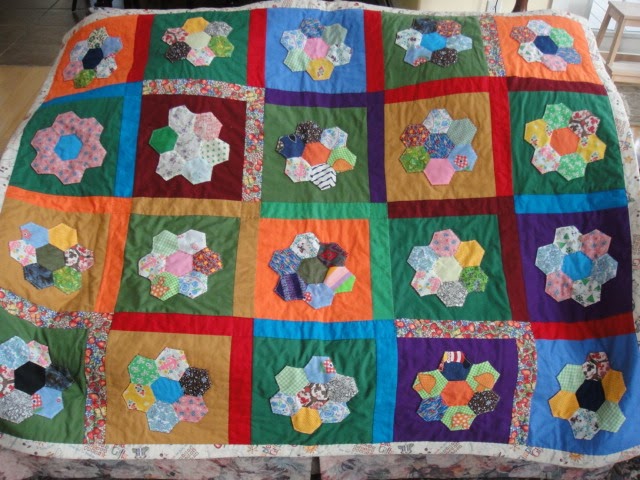 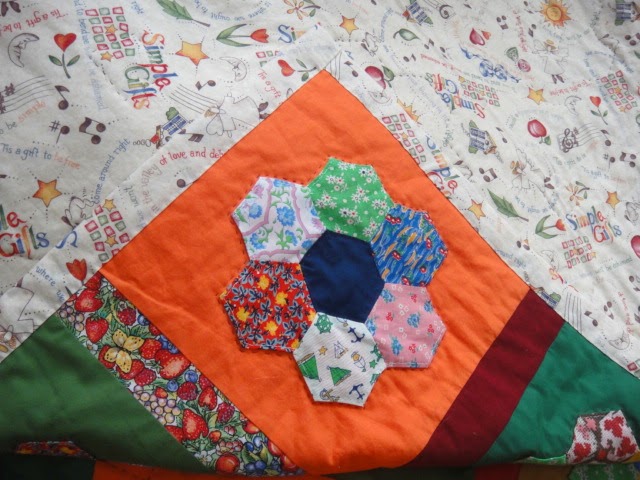 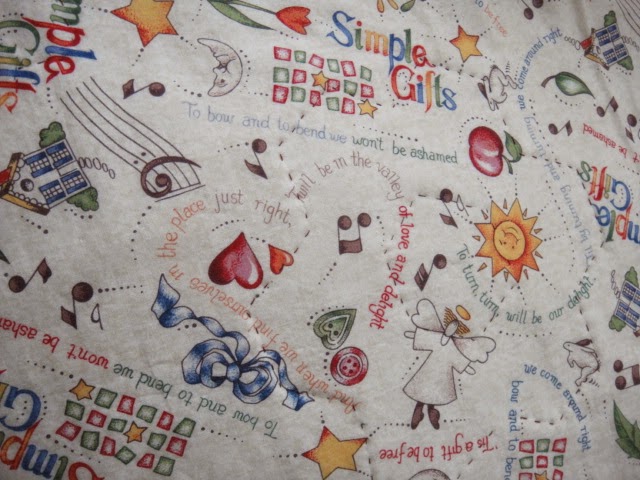 The backing fabric is printed with the words of the song "Simple Gifts," a song we sang around the camp fire all the years Ken and I attended family camp with the kids at Pilgrim Lodge in West Gardiner, Maine.  According to Wikipedia, "Simple Gifts" was written by Elder Joseph Brackett in 1848 while he was at the Shaker community in Alfred, Maine. These are the lyrics to his one-verse song:


'Tis the gift to come down where we ought to be,

And when we find ourselves in the place just right,


'Twill be in the valley of love and delight.

When true simplicity is gained,


To bow and to bend we shan't be ashamed,

To turn, turn will be our delight,


Till by turning, turning we come 'round right.