There are twelve days left in my school year.

The students and I have settled into a routine. Lesson plans are falling into place, and I am on schedule to cover the curriculum. I have only one morning duty next week because of the Monday holiday. I have only one afterschool detention duty left to serve.

I can see the light at the end of the tunnel.

There are actually fourteen student days left, but I will miss the last Friday and Monday. The weekend before the final days I will be in Seattle for my son's graduation ceremony at the University of Washington. I am delighted that I am able to go, while other family members have obligations that make it impossible for them to be there. T understands, and he will show me the city so Ken and I will have an easier time getting around in July. I will take lots of photos.

I don't want to test fate, but I am looking to apply for teaching jobs for the fall. I have the perspective that what is meant to be will be. I know that things may not go exactly the way I want them to go, but they will work out one way or the other. All I can do is put my best foot forward and see where that takes me.

I used to wonder if there was only so much good that could happen in a person's life. Now I think about the things, big and small, that happen every day that make me smile. So much depends on what I choose to focus on and how often I say "yes" to the opportunities that present themselves.

I took myself to the movies tonight. I needed a movie fix.

It has been slim pickin's for new releases so far this year, so much so that I have watched again my favorite movies from last year. We use Netflix, but I got tired of waiting for The Help and Moneyball so I bought those two. I enjoyed again two movies I relished as matinees last summer, Win Win and The Beginners. I have yet to see Iron Lady and Albert Nobbs, so they have been saved in the Netflix queue.

Last year spoiled me. It was a great year for quality movies with solid performances. I must have had a sense there would be a bumper crop because at the beginning of last year I set a goal to see 24 movies in the theater. By year's end I had seen 25.

Desperate for a big-screen fix I found a showing of a movie I had seen previewed. It looked interesting, a documentary in Japanese about the highest rated sushi chef in Japan. I don't eat sushi, but after seeing Jiro Dreams of Sushi I would travel to Japan to eat in Jiro's restaurant. His story is one of a man who loves his work and feels that there is always room for improvement. His oldest son, age 50, does most of the work at the restaurant but will not officially take over until Jiro steps down, which neither one of them is anxious to have happen. They work hard and take pride in what they do. Jiro advises everyone to do their best at whatever they do.

Sometimes a movie finds me.
Posted by Sharon at 10:50 PM 6 comments:

The May flowers from my daughter lasted until today. They were beautiful and all the more special because someone surprised her with them and then she surprised me. Her cats eat all things leafy ~ 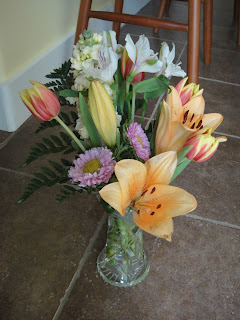 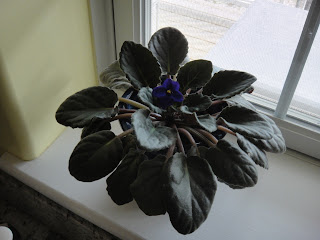 Last year in my sewing room I enjoyed a "Live With Intention" calendar, artwork by Renee Locks. The paintings and inspirational sayings gave me such a lift that I started turning the pages again this year, until I decided to take the calendar apart and frame each painting so I can enjoy them all at once ~ 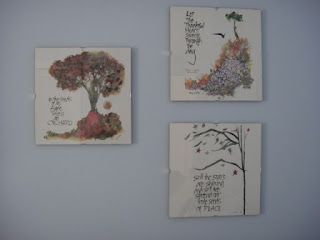 The lighter artwork in that room matches my lightened mood. More than one person has commented on how good I seem to be doing these days; my massage therapist says she feels a fire in me that she hasn't felt in a long time. There is something about feeling productive, even if I'm not doing exactly what I want to be doing, that puts a bit of bounce in my step.

My daughter gave me flowers for May Day, and I have a picture to post. But tonight I have too many words to write.

Ken and I bought a bed. We don't have it yet because it's being made in Massachusetts. We had all but decided on one from LLBean, mostly because we hadn't seen anything we liked better. Then last Saturday we went into a store where I love to look but rarely buy anything. We were looking for specific juice glasses, which we found, and I decided to visit the furniture downstairs like I always do.

I don't remember ever seeing the bed that caught my eye, made of cherry and walnut. Our first choice would be a bed made of cherry, but we have a walnut dresser we love and it's hard to bring those two woods together, unless the bed is made of both. The design is simple and the lines are clean. I never would have picked it out of a catalog or given it a second look online, but in person the bed is just what I would have wanted if I had known what I was looking for.

The question was would Ken like it too. He did. We walked down the street and decided over a cup of coffee that it was time to place the order. While we were at it we picked out two matching cherry nightstands with walnut handles. In 37 years we've never had matching nightstands. I am very excited.

Two weeks ago we made another kind of purchase. Airplane tickets. This summer Ken and I are traveling to the West Coast. We weren't sure dates were going to work, but once things began to fall into place there was no question it was meant to be.

At Christmas our son P, in San Francisco, told us he had plans to take a few days vacation in July and encouraged us to come for a visit. We wanted to also visit Seattle but our son T wasn't sure how long the summer session, his final one at UW, would last or if he would even still be in Seattle. When T called to say he was in classes until mid-July it began to feel like the trip would work. Ken researched baseball games [yes, we have been known to plan a vacation around a Red Sox game] and found the Sox playing in Oakland right when we planned to visit. Then he learned that the Seattle Mariners will be playing at home the weekend we hoped to visit that fine city for the first time. The icing on the cake was hearing from friends that they will be in town during our time in California and would love to host us for a weekend.

Like this past Wednesday when I had dinner with my daughter. We had talked on the weekend. Lots has happened and we needed time to catch up with each other, so I planned to meet her for an early dinner. The timing was perfect for so many reasons.

My week started with a dead car battery Monday morning. I quickly called school, emailed lesson plans, and called AAA. The nicest tow truck driver arrived in record time, jump started my car, and sent me on my way to work. That afternoon I stopped to have my mechanic check my battery, which was fine, but he saw I needed a headlight. Ugh. I had been an hour late to school, and I was an hour late getting home.

Tuesday was a long day at school and I came home exhausted. I got an email from T that he needed a copy of his college transcript ~ was there one here that I could scan and email to him? It was one of those times when my organizational skills came in handy because within minutes I had my hands on his official transcript. I called to tell him and learned that he had an interview for a job in Seattle.

So Wednesday I packed the transcript with my papers and figured I would find a way to scan and email it to him. I didn't figure that the task would be such an emotional one.

I was especially glad for the time with my daughter that evening. Her days are busy, so when we see each other there is a lot to catch up on. We talked nonstop for four hours. I felt better.

That night P called to touch base. He really likes his job, including the long hours and all the travel. We talked about seeing each other this summer. I shared that I am looking forward to the trip, that I miss seeing him, especially this time of year.

There is something about the springtime that I intensely miss all of us being together. There aren't birthdays to celebrate or milestones to measure, but the lengthening light and the warmer days put me in mind of track meets and chorus concerts, evening walks and cook-outs, the promise of summer months ahead to spend together.

As happy as I am for my children, I miss those summer months together. I wonder if I will ever be content with the catch-as-catch-can time we have together. I will think I am resolved to this life, then I need to excuse myself from a conversation with the school librarian because I can't hold the tears back another minute. Emotions spill over and thoughts turn to passing time that cannot be turned back and will not stop.