Red is not usually the first word that comes to mind when you think about January in Maine. This year is different. The geranium that I brought inside for the winter has chosen this month to bloom again ~ 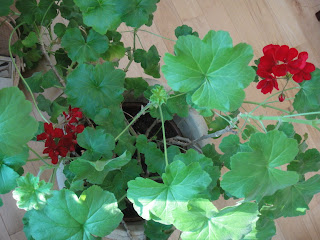 And for the first time in my life I have painted my toenails red. Don't look too closely because this is seriously my first attempt ~ 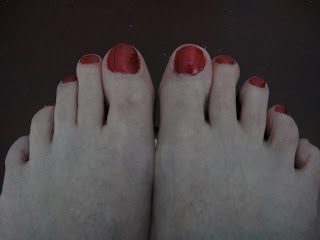 The color name is "Sharon" and is from the most beautiful box of color, a Christmas gift from my daughter ~ 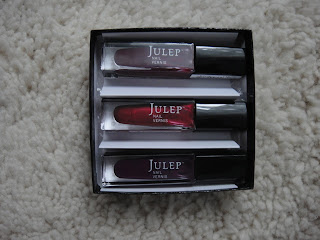 I am choosing to take this as a sign that this will be colorful year ~
Posted by Sharon at 12:24 PM 7 comments:

In late September I started thinking about what papers I would need to gather to apply for teaching positions. I had decided that since nothing else was panning out that I needed to consider the possibility of a return to the teaching profession.

Just days later I got a call for another interview for a social work position. I thought the interview went well, until I received a letter in late October with the news that I didn't get the job.

I felt defeated, no longer optimistic that I was destined to find employment in the social service field.

The holidays were just around the corner, so it made sense to take a break from the search for work. I had plenty to do and look forward to. The new year would be the time to start again.

And here we are in mid January. It's time.

Last week a friend helped me open a "Dropbox" account, a free website where you can store and then share documents and photos. On Saturday she helped me scan and save in "Dropbox" the documents I have only in paper form so I can submit online applications. She also printed applications for three local districts that still require paperwork to be submitted the old fashioned way, through the mail.

For now I will submit applications to school districts with the hope that I can get work as a substitute teacher. Job openings for next fall will be posted in the spring and summer, and I will have all my paperwork together to apply at that time. If nothing else, districts always need substitutes.

My resume looks splotchy for the last eight years. I will need to account for the two years I spent back in school and my attempt to change careers. It boils down to my feeling that I wanted to give myself a chance to do the work I've wanted to do for more than thirty years. If I didn't take a chance then, when would I do it?

I gave it my best shot. Now it's time to move on.

I have changed my perspective. The first time one of my children's teachers encouraged me to become a teacher, I was surprised. Then a friend shared with me a way to return to college to get a teaching degree. I liked the coursework, my classmates, and being in the classroom with students. The schedule coordinated with the life of my family, so I became a teacher...

with the thought that there would be time to do something different later.

Now I wonder if teaching chose me as much as I chose it. I wonder if the message is that I was on the right path all along. That path includes the return to school for an MSW and the time I have spent without a job. I have learned things about myself I never would have known without that part of the journey. I have changed in ways that I never would have considered possible.

Sometimes the desired goal is not the outcome. Sometimes "no" is the answer.

I have a new cell phone...that I haven't used to call anybody yet. I did use it to see what time it was when I spent the night at my daughter's house this week. [I was the first to sleep in the new guest bedroom, which isn't yet equipped with a clock.]

Five years ago my family decided it was a good idea for me to have a phone to use in case of emergencies on the road. My son P had added his brother to his plan when T started college in Boston, so it was easy to add me, too. On Mother's Day I was given a Razr flip phone, which I learned to use and found I liked having with me when I was away from home.

I figured out how to make the best use of that phone. Numbers for many friends and family members are in the "phonebook," which was especially useful when I needed to contact people when Ken was hospitalized in 2009. Our trips to Boston were much easier once we all had a way to stay in touch.

Now both my sons are on the west coast, so I rarely use my cell phone. It is almost five years old, which I am told is a good run. It's in my nature to use things as long as they still work.

For some time my daughter has been talking about getting a new cell phone. She has researched companies, their service areas as well as how they spend their profits. My daughter and I feel strongly that it matters that we pay attention to the causes that companies support. For that reason we each have our long distance service with CREDO, and we have been waiting for their service area to include our locations in Maine.

In December we learned that that time is now. I received an email for an excellent limited-time offer with CREDO mobile. As is my inclination I picked up the phone, called the 800 number, and talked to a pleasant young man named Jason, who was extremely helpful and able to sweeten the deal I was originally offered. I emailed my daughter and she did further research online. Long story short, after three days of emails and phone calls between my daughter and me, and phone conversations with Jason over that period of time, we signed up for a thirty-day trial period with CREDO mobile.

It has been twenty-seven days and the plan has been everything it was purported to be. My daughter likes the new Samsung smart phone and has found that coverage has been as good as it was with her old provider. Neither one of us had contracts to consider so we kept our old phones until we were certain that the new arrangement would work out.

I think that was confirmed today. My daughter and I had time to carefully review the first bill this week. Everything checked out, except that we were not credited for the activation fees as promised. Once my daughter added my name to her contract, one more of those details in doing business these days, I was able to talk to a customer representative about the itemized bill. No problem. As of noon today we had received the $70 credit.

I opted for another flip phone, which was all the more attractive because it was free. This weekend I need to dedicate some time to learning how it works and saving people's phone numbers. [All communication with CREDO is online or over the phone, so there is no convenient way to copy phone numbers from one phone to another.] That will call for a trip to Starbucks, which really isn't a chore for me, because we don't get cell service in our house.

While this transition isn't a big deal in the scheme of things, it is one more indicator of how life is changing. I am sure I will learn what I need to know and adapt to a different phone. I will share my new phone number with a few friends and family members...

In Christian history, this is the date that the Magi reached Bethlehem to visit the nativity. In my mind, it means that the story is just beginning....

My oldest son and his wife left for Boston today and will fly home to California tomorrow.

My youngest son left for Seattle on Tuesday to return to classes the very next day.

We had such a wonderful holiday. There is something to be said for a family of adults that shares the spirit of Christmas with genuine kindness and caring.

It doesn't feel right to say that life will now return to normal. Life felt normal while everyone was together, sharing homemade meals and telling stories. We had days with each other and hours in a row to enjoy conversations about daily life and everyday occurrences.

I made a point to soak in all I could.

Now life will go on. We will not be able to relay the everydayness of our lives over the coming weeks and months.

Tomorrow I will take down the tree and put Christmas away, but I will remember this year as one of the best Christmases ever.

I did not take one moment for granted.

I enjoyed every minute.
Posted by Sharon at 11:06 PM 7 comments: