Oh, To Be Ambidextrous

I have been working through something.  Bear with me because there is a point.

The first time I played pool with Ken he asked me what I was doing; I told him I was aiming to hit the ball.  He smiled and asked me why I was holding the cue left-handed. I smiled because the boyfriend who taught me to play pool was left-handed, and that was the only way I knew.

I am naturally right-handed.  It would be nice to be able to use my left hand to hold a paintbrush or roller, but I haven't had much luck with that.  My writing is hardly recognizable when I use my left hand.  My mother tried to teach me to knit, but she's left-handed and I never could make my hands work that way.

It must be a matter of practice.  If I spent more time practicing with my left hand, I have no doubt that I could make it more productive.  It would take perseverance.  I would need to be patient with myself while I made mistakes and refined my movements.  It would need to be more important to me than it is for me to put in that kind of time and energy.

It seems that the first way I learned to do something is the way that sticks.  It's not that I can't change - it's just that it takes intention to learn a different way.

I am finding that this is also true with changing my habits of mind.

Last week I had an acupuncture appointment with Brett.  I continue to go because I think it helps me reset my system and supports my intention to be my best self.  I want Brett to notice changes, even small ones.  She said it's hard for a person to change their nature.  She added that people can experience shifts.  I decided to focus on that while I was on the table.

I cannot change who I am, just like I cannot become left-handed.  It's hard to change the ways I've always thought about things, but it's possible to make room for small shifts to happen.

I am focusing on the ways I can be more of who I want to be.  It's taking a lot of time and energy to achieve small changes, which will hopefully come more naturally with practice.

Home again.  I spent the week-end catching up and looking through photos from my trip....

I celebrated St. Patrick's Day early with Kenneth.  Green is his color ~ We played with blocks ~ 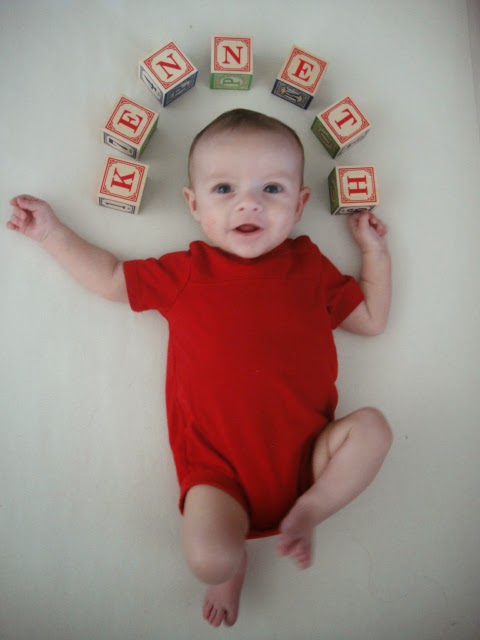 And chatted after breakfast ~ 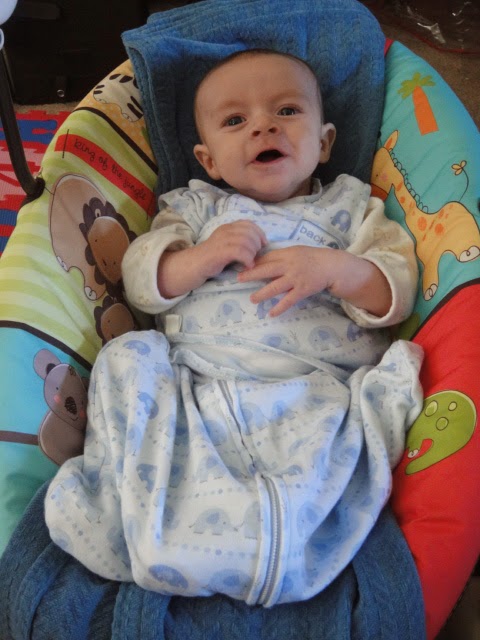 We cuddled every chance we got ~ 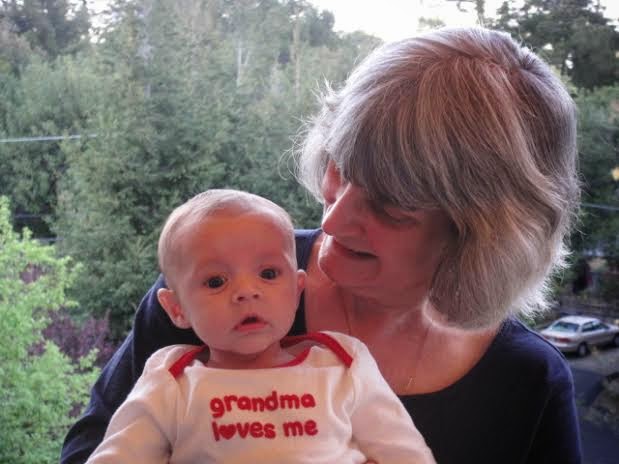 It was as if time stopped while I was in California.  Spending time with Kenneth and Claudia was all I had to do.  My son was traveling on business, so it was just the three of us for the week.  It was a splendid task, to focus on the baby who laughed and cooed and looked right at me.

I brought that feeling of being in the moment home with me.  I want more of that feeling in my life. My own children were the first to show me how, and my grandson is reminding me now....
Posted by Sharon at 11:01 PM 8 comments:

A Week With The Grand Sun

My visit has been perfect ~ the weather, the walking, and the time with my daughter-in-law and grandson.  We had the chance to visit three tasting rooms last week-end; two of the wineries are fairly new and the wine was good.  Kenneth drank milk, but he still had a good time~ 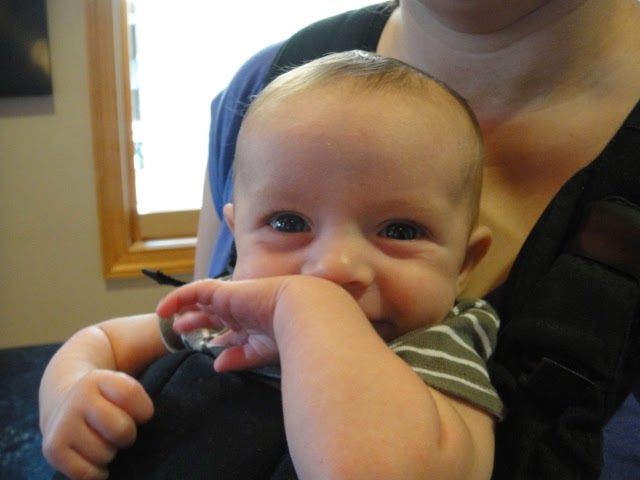 Sunday we walked to the library and its used bookstore.  I picked up several books I've had my eye on, with the bonus that the proceeds benefit the library.  Monday was a fussy day for the baby, lots of eating and burping and bouncing to keep him happy - probably a sign he's going through a growth spurt.  Tuesday we had dinner at Claudia's parents' house, always a good chance to catch up.  Wednesday we made the trip to the Legion of Honor Museum in San Francisco and learned a bit about Matisse.  It was Kenneth's first foray into the art world, though he slept through most of it.  Today we will take a walk downtown to enjoy a brunch of pancakes, the best I've had in a long time and want to enjoy again before I go.  I will mail my books home and soak up as much sunshine as possible before I fly home tonight, back to fresh snow and cold temps.  It has been a glorious week.  I'm going to miss this little guy more than ever~ 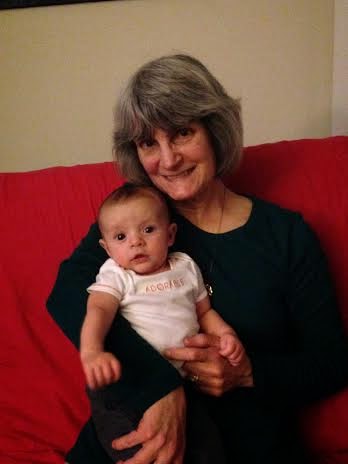 The trip to California went off without a hitch.  No delays.  Since I had everything with me I arrived with luggage in hand.  Regardless how you fly, it's twelve hours from check-in in Maine to arrival in California.

I have made the trip enough times that at the airport I know where to look for restrooms, where to sit at the gate, and where to get a good sandwich at JFK in New York.  Once on the plane I no longer worry about where I will put my stuff or how to excuse myself from my seat.  I have learned to ask for coffee and water at the same time.  I landed in San Jose for the first time but knew enough to follow the crowd to exit the terminal.

Kenneth is almost eleven weeks old and has grown so much since my last visit.  He smiles easily and coos in reply to my attempt at conversation.  With short catnaps during the day, he now sleeps in his crib at night for long stretches of time.  Yesterday I tucked him in under my right arm, facing out, to walk him around the apartment, and he fell asleep for half an hour.

In the evenings Claudia props him up on her legs for an end-of-day visit.  What's not to love? 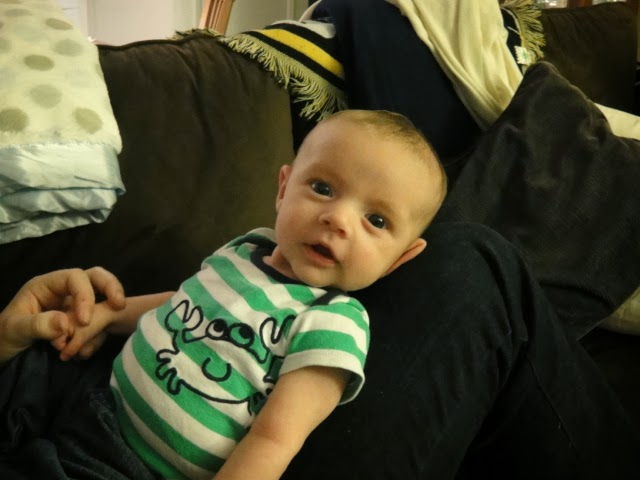 It has been a strange few days around here.

I was supposed to be in California tonight.  In mid-February an opportunity to make the trip presented itself and I jumped at the chance.  I had thought it would be at least April before I would go again.  This time I planned to stay ten days and to carry on my luggage so I would be sure to have clothes to wear.  I hadn't said anything yet because I didn't want to jinx my plans.

Well, winter took care of that.  I was following the weather closely and from here things looked good for a Monday departure.  Here it looked good.  Not so further south.  Friday I received an email from Jet Blue advising me to change my plans while there was still time.  If I waited until the time of my flight I couldn't make a change at no charge, and the airline couldn't guarantee I'd get a later flight, which in this case is not until Thursday.  I spent an hour searching for other flights on different days into and out of different cities.  No luck.  Since I really want to make the trip, Friday I changed my flight while I had the chance.  I will leave Thursday, weather permitting.

This is where things started to get strange.

I joked with Ken that maybe the change in plans meant I needed to be home because something was going to happen.  I was thinking maybe I'd get a call that my luggage had been found [ten days ago I was contacted for more information so there's progress] or I'd learn that I won the HGTV Dream House in Tahoe.  In other words, something good.

Friday night we realized that the freezer part of the refrigerator had stopped freezing.  All weekend the temperature hovered in the low teens, not cold enough to keep ice cream or to freeze things not frozen.  Two years ago when the ice chute went belly up we pledged we would not put any money into repairs of a refrigerator we've never liked.  Now it's eight years old, which I've been told is the average life expectancy of an appliance these days.  We spent the weekend comparing models and prices online and in stores.

In the meantime our heating system was making unfamiliar noises.  It was serviced last week and I wanted a follow-up to make sure everything was okay.

Today, the day I was supposed to leave for California, I found a floor model of the exact refrigerator we want on sale at a store I've never visited but my daughter happened to mention Friday night.  They don't usually deliver in our area on Mondays but today they happened to be heading my way, so they put the fridge on the truck and brought it by.  I love it.

While waiting for the delivery, the furnace guys came by to check out every aspect of the heating system.  We talked about all the moving parts, turned the heat up, listened intently, and they purged the system again to make sure there was no air in the lines.  They made it sound like no big thing, but the peace of mind will help me sleep tonight.  Tomorrow I am going to surprise them with donuts.

Tonight I was getting the kitchen cleaned up after finally getting everything settled in the new fridge.  All of a sudden I heard a loud, steady, high-pitched squeal.  I dropped what I was doing and started following the sound, which showed no signs of stopping.  This was the source of the sound: 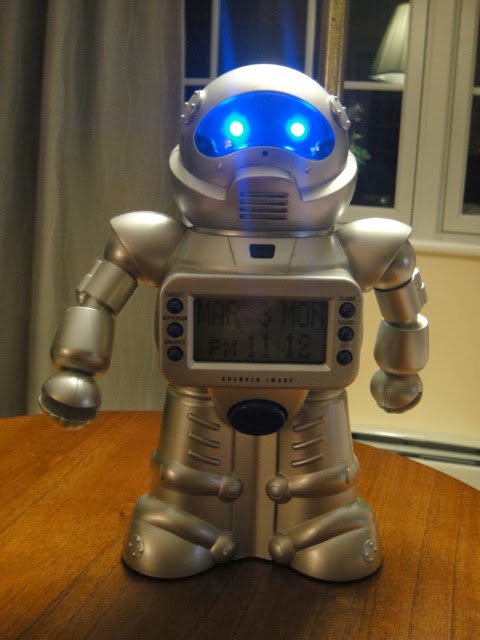 Meet Bob, short for Robert the Robot.  He's about ten years old, a bank that thanks you for your coins and reminds you to "save today."  Technically he belongs to my youngest, but when Travis went to college we retained custody.  Bob lived on the kitchen counter in our old house, and because he is sensitive to light he would greet us with a variety of sayings when we passed by or the light in the room changed.  Even though Bob still talks and his eyes light up, he doesn't move his arms any more and we haven't been able to set the date and time for months. I have never heard the high-pitched squeal he let out tonight that couldn't be stopped until Ken replaced his batteries.  I pushed the reset button.  What do you know ~ Ken was able to set the exact date and time with no trouble.

I laughed.  My reset button was pushed, too.  The date and time was changed, and things happened.

I will be around for two more days if HGTV wants to give me a call.
Posted by Sharon at 11:55 PM 9 comments: