A Hug From The Ocean

My friend Ruby is home.  After two weeks in and out of the hospital, and two weeks at a rehabilitation facility, she called me last night to say she is not yet feeling her old self but she is delighted to be home.  She is hopeful recovery will continue in the comfort of familiar surroundings.

Other friends are dealing with loss and tragedy.   My daughter and I have shared news from mutual friends, and she summed up my feelings when she wrote "Life is fleeting, and we really don't have control."

So I have decided to share photos from the weekend.  My son was home, and we made a trip to Camden.  If we go to Popham Beach to appreciate sand and Mother Nature's inclination to renovate the shoreline, we go to Camden Harbor to appreciate boats of all sizes and the beautiful views.  It was another beautiful day, and the hug from the ocean felt glorious.

Ken and I knew when we started this project that it would take weeks to complete.  Now I hope we get it closed in before the snow flies.  The basic frame went up on Sunday.  The roof rafters were scheduled to go on this weekend but that has been delayed until next weekend, at the earliest, because the instructors have other obligations.  The frame needs to be complete before wall boards, roof, windows, and door can go on... so fingers crossed that our good weather holds a while longer.  Here's how the basic frame went up.  Ken is in the white t-shirt and black hat ~ 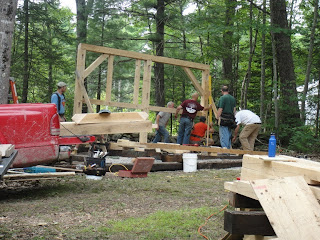 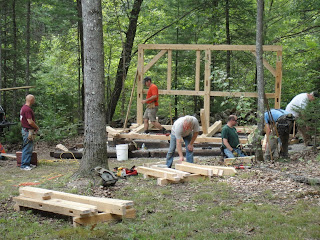 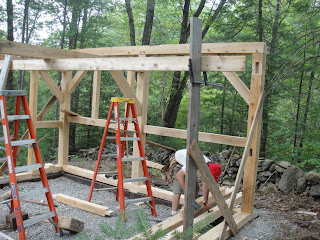 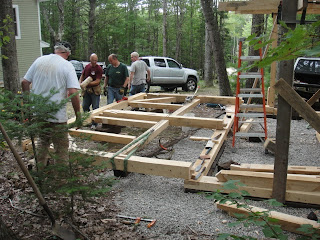 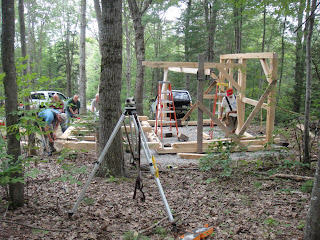 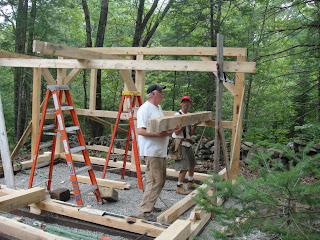 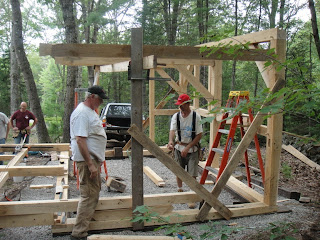 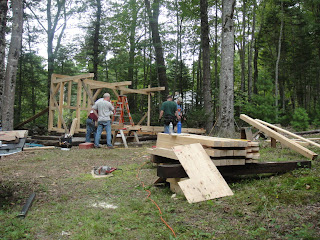 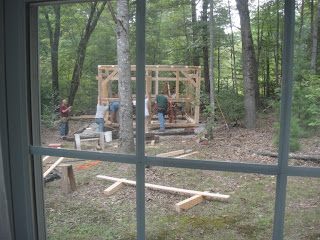 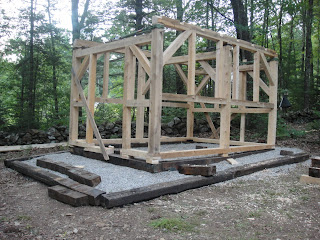 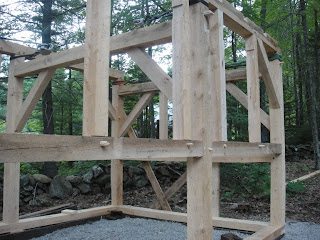 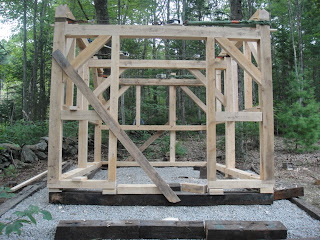 Yesterday afternoon I went to Popham Beach with a friend.  Storms in recent years have reconfigured the beach such that sand bars build up, and the shape of the seaside changes from year to year.  When we make plans to go to Popham we have to check for low tide or we will not be able to access large swaths of beach.  Low tide was at 6:00 p.m. yesterday, a gorgeous summer day, so the time was right for a trip~
I came home sandy and satisfied.  A day at the beach with a friend lifts my spirits ~
Posted by Sharon at 8:15 AM 2 comments:

Ken has been interested in timber frame construction for as long as I can remember.  Last summer we stopped at a place off the interstate that has model structures set up.  In July the local Long Branch School, a place to learn traditional skills, advertised a timber frame class for mid-August.  Ken expressed interest and I encouraged him to sign up.  The class started Thursday, and he has been working long hours with five others to build a 10 x 14 timber frame from scratch.  The best thing is that we were the only ones interested in buying the finished product, so the timber frame will be ours and will be constructed on our property.

The work started two weeks ago when we had to decide where to put the building that we are calling the "shed."  One of the instructors came by to see if the spot would work and what Ken would need to do to prepare the site.  Last weekend we had 10 yards of 3/4 inch stone delivered, and the adventure was underway.  Here is the start in pictures~

My elderly friend in town was transferred to a rehab facility early this week.  After two weeks in and out and back in the hospital, Ruby is finally beginning to feel better.

I visited her in the hospital the end of last week, once her son and daughter gave the okay.  The second admission found her in the care of a different doctor, and the new perspective provided a different course of treatment.  It takes time for medications to take effect, and the difference just between Thursday and Friday was remarkable.  By Monday it was decided that she was ready for rehab.

The transition was tough ~ a new place, new staff, and unknown expectations.  She called me Monday evening.  She wanted help with a plan to leave as soon as possible.  I told her I would visit Tuesday.

When I arrived yesterday morning I didn't know what to expect.  The place was bustling with staff and residents.  More than one person greeted me and offered to help.  I was directed to Ruby's room.

Throughout my visit we had time to talk about how she was feeling, her transition to this new place, and the things that aren't known at this time: how did she get so sick in what seems like a short period of time; how long will it take for her to be well enough to go home where she has always lived independently; what does the future hold?  During the day she had sessions with an occupational therapist, who fitted Ruby with special stockings for her swollen legs and brought a recliner into the room so Ruby can sit with her feet elevated, and a physical therapist, who took Ruby through the paces of going up and down stairs and had her doing leg lifts with light weights in the therapy room.

Ruby didn't understand that rehab is where she will work to get better.  Every person who spoke with her, including a long private session with a social worker, talked about what needs to happen so she can go home.  At 80 years old, she remembers how people used to go into facilities, never to leave.  Now the goal is to help people stay independent as long as possible.

I have tried to call three times this morning but haven't found Ruby in her room.  I was told there is a barbecue for lunch, and with her returning appetite Ruby may be enjoying a hamburger as I write this.  I will go tomorrow to take her a can of mixed nuts and fresh blackberries that grow near her house.  On my way back I will stop at her house to hang freshly laundered curtains and do a bit of cleaning in preparation for her return home, which I am optimistic will happen.

Ruby has been a dear friend for six years.  We discovered early on that we are a lot alike, and we understand each other.  She first told me, when I visited her in the hospital, that she didn't want me to come but that I came anyway.  I told her that of course I would come.  She didn't want to ask but she didn't have to.  We have talked over the years about how we found each other when each of us needed a friend to talk with over a cup of coffee at the kitchen table.  At times she has been a lifeline for me.  Friends do that for each other.  Now it's my turn.
Posted by Sharon at 1:01 PM 7 comments:

We have had many days of rain this summer, so there is lots of green to see.  Fortunately, we've just had a few partly sunny days so there is now more color mixed in with the unruly green in the whiskey barrels I planted with annuals this summer ~
The weather is changing.  This morning it was 55 degrees at 7:30.  Tonight I closed the windows.

I went back through entries here to find photos of the coast of Maine.  They are scattered hither and yon, so I started a new category called "Maine."  If you'd enjoy an ocean scene or would like to see some of Maine's terrain, take a look.  I have plans to take more photos of this lovely state in the coming months.
Posted by Sharon at 9:54 PM 5 comments:

We had a sad start to August this year.  Yesterday was Millie's last day with us.

I could no longer deny how sick she was when she stopped eating.  She was moving slowly and only wanted to make her way to her favorite spot in the closet in our bedroom, where she liked to nestle in among our shoes.  It had been weeks since she kept my seat warm at the computer~ 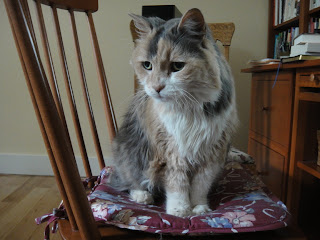 I knew when I made the late-afternoon appointment with the vet that it was the last trip Millie would make with me.  She was weak but still vocal about how much she disliked riding in the carrier.  The vet said there was something wrong that we couldn't see; Millie had lost a pound and a half since July 12.

I told Millie what a good cat she was and how much we loved her.  I told her to look for Leo, who will be glad to show her around.  Then I said good-bye.

I couldn't stop crying.  I knew what was coming and that it was the best decision, but losing her so soon broke my heart.  I wanted her to get better, and for a short while when she was first with us it looked like she was.  Yesterday morning a friend suggested that we each want a safe place to die and that maybe Millie felt that with us.  I know I loved her more than I expected to and miss her more than I thought possible.

Farewell Miss Millie.  You have a place in my heart ~ 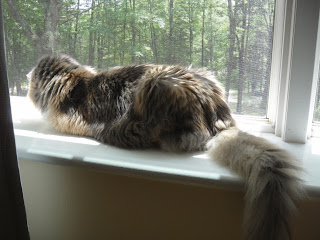