I wrote the last post while I was watching The Oscars, one of the treats of February.  I had seen more of the movies up for awards than I realized.  I saw Birdman and The Judge by myself and want to see them again with Ken; I particularly enjoyed the performances of Robert Downey Jr. and Robert Duvall in the latter; I thought Birdman was over the top, which might have been why it was so popular, and while it wasn't one of my favorites last year I wouldn't mind seeing it again to see what I might have missed.

Ken and I both liked Wild; I got so absorbed in the movie I forgot Reese Witherspoon was acting, and in a different year I think she could have won the Oscar.  Ken and I thought Grand Budapest Hotel was weird, but that kind of movie often does well with voters of The Academy; I don't want to see that one again.  We did like The Imitation Game, but instead of seeing it again I want to learn more about the mathematician Alan Turing and how his mind worked.  We saw Begin Again on DVD, and that is the sort of movie I will watch again because I like the story and the actors and the music is good.  I saw Into the Woods with my daughter and it was good fun; Anna Kendrick has an amazing voice, and Meryl Streep certainly held her own.

While still watching The Oscars I added movies we haven't seen yet to our Netflix queue:  Boyhood, Selma, The Theory of Everything, and Big Hero 6.  The winning song from Selma gave me goose bumps.

There are some movies from last year that I don't care to see at all.  I read the book Still Alice and thought it was well written, but now that I know the story I don't want to see the movie, though I'm sure Julianne Moore did a terrific job and deserves the Oscar.  I am just as sure J. K. Simmons earned his Oscar, but I don't want to see Whiplash because I don't enjoy movies about one person intentionally abusing another.  American Sniper and Foxcatcher are based on true stories, and I don't want to see them because I know enough about those tragedies already.  After last year's Academy Awards we gave in and rented Gravity, which was as bad as I thought it would be; I will not be suckered in this year to watch Interstellar.

That Sunday evening awards show was the perfect way to end February vacation.  I was relaxed and well rested.

Then I went back to work.  I have been tired every night, so tired that I have climbed into bed early the last two nights.  The frustration of the job is tiring, as is the frigid cold weather and the mountains of snow.  Sometimes the best thing is to climb into a warm bed with a good book ~ I'm on my third re-read of favorite Elizabeth Berg novels.

Another treat of February is that it is the shortest month, so no matter how cold or snowy it is we know it will be over soon.  It's also the last full month of winter.  We have no illusions that spring is anywhere close, but it feels good to say "the last month of winter."

We get accustomed to the snow as it piles up.  I took photos after the January 27 blizzard and again on February 22 after the storm the day before.  Yes, we had a lot of snow in January, and photos show how much more we have now.  Ken does a terrific job of keeping us cleared out ~

Results of the Blizzard of January 2015 ~ 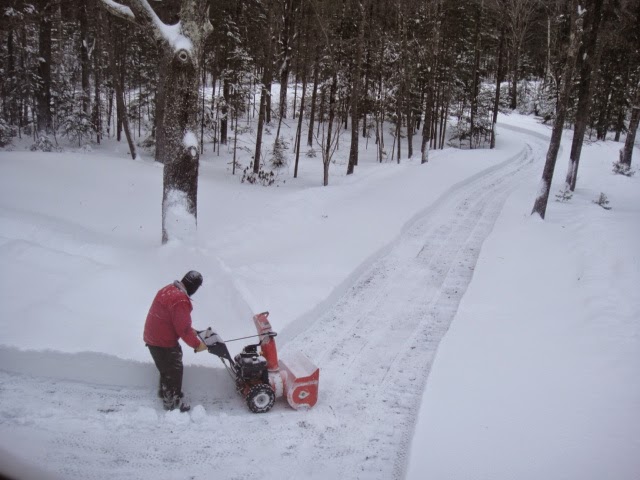 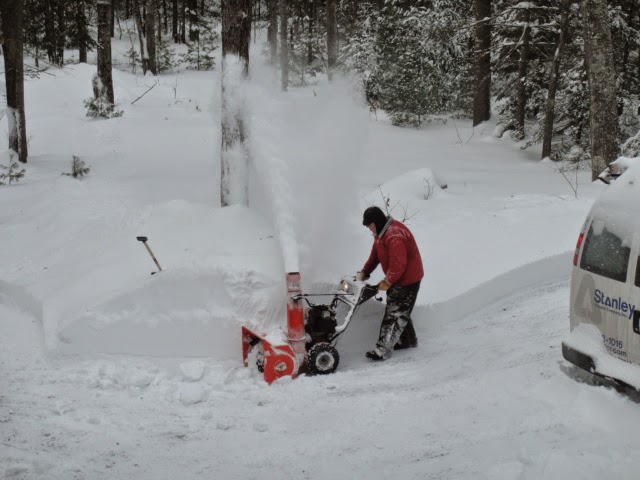 After the February 21 Snowstorm ~ 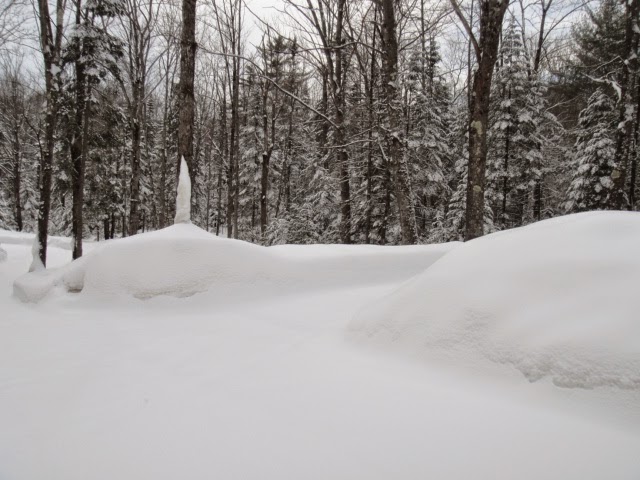 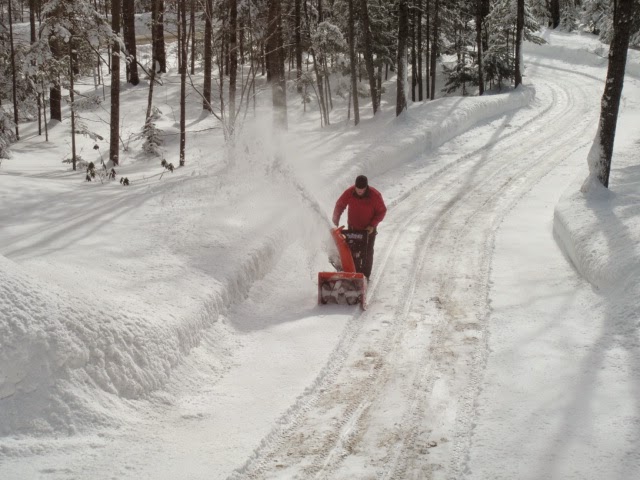 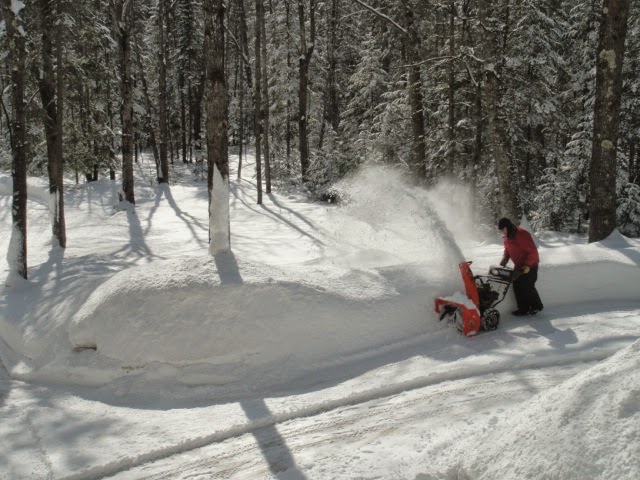 He gets those nice clean edges and keeps the driveway wide by blowing snow right up against each side.  It's a lot of work but it sure makes it easier to come and go.
Posted by Sharon at 7:17 PM 7 comments:

I just had a week off from school. The week of Presidents' Day is school vacation for Maine students. When we first moved to Maine it seemed strange for schools to have another week off so close to Christmas vacation, but once I had kids in school I could appreciate the time off.  This was not a thing when I was growing up in Maryland.  I think they do it here because some people want to go skiing and others want to go where it's warm, but I don't know that for sure.  We just enjoyed the break in the routine when the kids were little.

I made the most of the week.  Hair cut.  Teeth cleaned.  Reading.  Sewing.  Movies. Massage.  Shopping.  Sleeping.

Of course we got more snow, so that was a good excuse to stay home for two days, which was lovely.  I've always enjoyed time at home.  These days I appreciate that time even more.

There was time to send emails, make phone calls, and write letters.

There were things I intended to do that didn't get done.  I still haven't sent Christmas cards out, for a variety of reasons, so I'm thinking I might send out looking-toward-spring cards.

I didn't post here either, though I have taken some photos of the snow to share tomorrow.  I was waiting for something interesting or exciting to happen, but the week passed fairly quietly.  I didn't win the lottery, which was disappointing, but there's always next time.

By Feet And Inches

As promised it snowed on Groundhog Day - more than a foot.  That made for snow day #4 with a late start for schools the next day in hopes that roads could be cleared and people would be able to get out.  For the most part it worked and we had a clear day that Wednesday.  Snow throughout the day on Thursday delivered another five inches and made for the most treacherous roads so far this winter, but with no time off everyone made the best of it and left plenty of time to travel.  We had two days to shovel out before snow arrived again this past Sunday morning and continued right through Monday evening, topping off with another fresh six inches.

For those of you keeping count, in central Maine we have had over five feet of snow since January 1.

Ken cleared away a few inches Sunday evening before he headed out of town for the week.  He called yesterday and offered to come home but I said I would be okay.  I took a personal day today and had a lot to do, but I decided if I had trouble I would figure something out.  As it was I got out of the driveway alright but got stuck trying to make it back up the hill.  Somehow I managed to back down [after a lot of back and forth] and went about shoveling my tire tracks and putting down sand.  It worked!  I made it into the garage.  I will make it out in the morning and not worry about the trip back up the hill until I get home.

Aside from the weather, this year got off to a tough start.  It really has been a day-to-day slog.  There have been few bright spots.

Luckily, the last few days have seen a bit of an upturn.  Friday evening Ken prepared a lovely meal and our daughter joined us for a relaxed visit.  A friend took me to the movies on Saturday.  My mom sent me chocolates and last evening I had a nice chat with her on the phone.

Today I considered going shopping and getting my hair cut short.  I did neither.  Instead I turned in the paperwork necessary to refinance the house [further cutting our interest rate so that it is now almost half of what it was when we bought the house in 2007] and changed long distance companies [someone from some department at CREDO finally called me about the email and letter I sent to say how thoroughly dissatisfied I was with their customer service; she not once apologized or offered any form of compensation but said over and over how this sort of thing never happens; well it happened to me and not only do I feel better now but I will save over 50% on my long distance bill by changing companies].

Today was productive and uplifting as well.  I received the perfect cards from my two oldest friends, both across the country and valued beyond words for their friendship.  I received a bonus phone call from my friend in New Mexico, who sees right into my heart and says exactly the right thing.  Then my sister surprised me with a phone call from Scotland.  The day topped off with phone calls from my son in Boston and Ken in New Hampshire.

Happy Birthday to me.  I am going to count today as a fresh start to the year.
Posted by Sharon at 11:55 PM 11 comments:

That describes the last week of January.

It was the snow days that made it possible for me to make it through the week.  I was able to muster the energy to work Monday and Thursday, but I don't know how many other days I would have made it to school.  I have been sick with sinus pressure, headache, stuffy head, sore throat, swollen glands, cough, and runny nose.  The symptoms keep cycling through so that just as I think I'm getting better something else pops up.  Other than some wooziness this morning, I felt better today.  Maybe whatever this was meant for me to ease out of January.

I took it slow but still managed to keep up with laundry, make a dozen new cloth napkins, reserve places for my daughter and me at a quilting retreat in August, order new artwork for the bedroom, move furniture in the living room, and enjoy full hours at a time reading a new book.

There have been missteps, too.  My brain took a holiday yesterday - when I wasn't feeling any better I neglected to cancel plans with a friend and forgot to let my daughter know I wouldn't be coming by.  That's not like me.  I'm usually on top of schedules and make it a priority to keep commitments.  Those lapses are the downside of not feeling well and giving into that feeling.

An upside has been that I haven't been hungry.  Since the first of the year I have favored cookies, chips, and wine.  Being sick has broken that cycle, and I've been drinking less coffee, also a good thing.  It's a good time to start some new habits.

Fresh start today, the 1st of February.  It was sunny and the temperature got into the teens.  The Patriots won the Super Bowl.  A day like today could give a person hope...

Except that there are several inches of snow predicted for tomorrow.
Posted by Sharon at 11:22 PM 8 comments: