I am dating a married man.

We had a moment at dinner early last week where we each said what the other had been thinking: we can't keep going this way. Each one of us has become comfortable without the other. We spend a lot of time apart for lots of reasons, and it has become too much work to reconnect when we are together.

I think we need a good fight to get things rolling in the right direction, but we don't fight. I enjoy a good argument, a battle of words that express different viewpoints and positions. Ken does not. So we don't argue. Instead we simmer and stew, and as time goes by we get quieter and quieter...until we really don't need to talk at all.

This isn't the first time we have been through this routine but each time it's easier to slip into. The difference this time is that we have no one around to pull us back into conversation. That's why we decided sooner rather than later that we needed to do something about the situation, because there is no one else anymore. There's just us.

The next night I made a nice dinner and we made a point to talk to each other. The following night we made a fire in the chimenea on the deck, cooked dinner over the fire, and enjoyed eating outside in the warm evening air. The following night we went out to dinner and a movie. Last night I made another nice meal, and again tonight Ken cooked dinner over a fire.

I asked Ken last evening if we are dating. He said he thought so.

Tomorrow we are going to the Common Ground Fair, which we attended last year for the first time in many years. We had such a good time, and we are looking forward to going again.

So here we are in our 35th year of marriage. I don't think it's ever going to be easy for us. Maybe it's not easy for anyone, people just pretend that it is. Maybe there are couples who sail through life together, and I hope they know how lucky they are.

We feel lucky to be able to say we are still here.
Posted by Sharon at 10:55 PM 9 comments:

What Do I Know?

I have been so tired.

Last night I dropped my clothes on the floor, climbed into bed, and slept for eight hours. I can't remember the last time I had a full night of uninterrupted sleep.

I woke up feeling good and started thinking about what I need to do to prepare to apply for teaching positions. I have spotted a few openings that are so tempting that I am willing to tackle all the paperwork needed to apply. Schools require written letters of reference, proof of certification, and a completed application specific to their district; and often they also ask for an applicant's philosophy of education, college transcript, sample lesson, and proof of qualification. I have decided it's time to expand my search field to once again include teaching.

The phone rang just after 8:30 a.m. It was a woman calling about an application I submitted three weeks ago for a brand new position working with community members in a town about 25 miles from here. Was I still interested in an interview? Yes. How about a meeting on October 4? I will be there.

And my day was started. I made soup, baked a pie, did laundry, and started a more detailed search for teacher openings. It is going to require some effort to pull together everything I need for applications, but at this point I need to keep going while I have some momentum building.

I feel like I don't know anything anymore in this job search process. I can't get a sense for what might work and what won't. I have no way to know who I might hear from or what they are looking for.

The only thing I know to do is to keep trying.
Posted by Sharon at 11:20 PM 4 comments:

Today I added one to that number because our anniversary is tomorrow.

Last year I posted photos of the lobster dinner we ate to celebrate. This year we are returning to New Harbor with friends for what I am sure will be another delicious meal.

I recently commented on someone's post that it is a challenge to be married to the same person for 34 years. Each of us has changed so much that we are not the same people we were all those years ago. So much has happened in our lives that we are nowhere near where we were when we started our life together.

I don't have the romantic view of marriage that some people have. I said to one of my children not long ago that I don't believe in the concept of soulmates, the idea that there is one right match for each individual. When Ken and I met, we had each just ended a relationship. I have no doubt that we would have each found someone else if we hadn't found each other.

We did find each other. After a few months we made the decision to be together, and we married two and a half years after we met. Ken and I had time to really get to know each other. We couldn't see the future, but we had a good idea what life together would be like before we said "I do." I used to say that we got the "dreaded first two years" out of the way before we got married.

Even after all that, there have been a fair number of ups and downs through the years. There have been times when I wasn't sure we would make it to the next anniversary. Then something shifts and we adapt and the course runs smooth for a time. I think that's true of any relationship that lasts as long as ours has.

His Bags Are Packed

Eighteen days ago when my son T moved home from Boston I was grateful we would have some time together before he left for Seattle.

It has been a better visit than I could have imagined.

We made trips to renew his driver's license, to buy clothes and luggage suitable for a grad student, and to take care of all those things he needed to take care of. Last night we went out to dinner so we could watch the Patriots' first game of the season.

T went to the dentist, caught up with friends, and attended an ex-girlfriend's wedding.

He has sorted through everything he owns. He has cleaned out, organized, donated, and made decisions about what to store and what to take with him....

And tonight he packed his bags.

He will be home at Christmas. We will make a trip out there next spring.

It's not for ever, but it is for at least a year.

Back when we had two small children, Ken and I tried our hand at canning. We had a neighbor with a large garden, and he often shared his surplus. We canned tomatoes, green beans, pickles, and zucchini relish. My favorite of these was zucchini relish, which I hadn't thought about for many years...until my friend in town gave me two large zucchini. I couldn't resist ~ found the recipe, fired up the food processor [which we didn't have lo those many years ago when we grated everything by hand], and put together a batch of relish. It's hard to capture the beauty of this particular relish, and I finally resorted to taking a jar outside with the hope that the natural light would shine through the beautiful color ~ 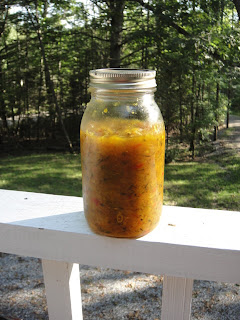 I will share the recipe with the caveat that it is sweet. I remembered that after a taste test, when I also remembered that I cut down on the sugar in the days when I made a second batch.

Grate 10 cups of zucchini and 4 cups of onion. In a large pan combine the two and add 5 Tbsp. pickling salt; let sit 8-10 hours.

Mix everything and bring to a boil. Simmer 30 minutes. Pack into hot jars and process 15 minutes in boiling water bath.

This is good with anything grilled, and we will enjoy it all winter long as a reminder of the taste of summer.

Late yesterday afternoon we were making plans for dinner at our favorite diner when there was a knock at the door. It was our next-door neighbor who wanted us to know that power had been restored. His wife had called him at work, and on his way home he heard our generator still running. It was doubly nice to talk to him because he shared that they have a new baby at their house.

On our way to dinner we checked out the status of the telephone pole, which hadn't been replaced after all. The power company sawed off the splintered top and extended the pole with an insulated pin. Good as new.

I got home from dinner just in time to host a monthly neighborhood meeting in a quiet living room fully lit, thankfully, by electricity. It turns out the store-bought cookies were just as good as my usually homemade ones.

This morning it was time to tackle the laundry that has accumulated, along with all that my son brought home with him. There will be time to vacuum and get organized. It doesn't feel so much like a chore now that I have the luxury of turning all the appliances on.